Thanks for enquiring about the report on ill fitting kids shoes - the fact that you are even bothered to show an interest is very refreshing! Below is the report on "4 Million children in wrong shoe sizes".

I think you'll find it very interesting and that you are right to be vigilant on your choice of footwear for your child.

Four million children are wearing the wrong-size shoes, according to new research. Why?

It's a common part of childhood, the trip to the shoe shop and your feet being measured. But according to new research by Glasgow Caledonian University, there are four million children today wearing shoes that don't fit them

Parents who squeeze their child's feet into the wrong-sized shoes could be condemning them to a lifetime of problems. From blisters, pressure sores and ingrowing toe nails in the short-term, to feet deformities like hammer toe and knee and posture problems in the long-term. The list goes on.

People need to take as much care of their children's feet as they do with their teeth, say podiatry professionals. If that's the case, why are so many children in shoes that don't fit?

"People think of feet as smelly," he says. "They often just forget about them, when they should actually take much more of an interest."

Children's feet tend to grow rapidly in the first four years of their life, but it can take up to 18 years for the foot's bones, muscles and ligaments to harden into adult form. So teenage feet need to be looked after as well as those of smaller children.

According to the research, one in 10 parents say their children have continued to wear shoes that are too small for them. Half admit to only buying new shoes when their children complain their feet are hurting.

Podiatry experts say many people neglect their children's feet because they simply don't understand the problems an ill-fitting pair of shoes can cause. Only 40% of parents interviewed as part of the research took into account whether the shoes on their offspring's feet were well fitting and supportive.

Another issue is money. Two fifths of parents admitted to buying shoes that were too big so their children could grow into them over time, saving money. When it came to actually purchasing footwear, a quarter of parents said they based their decision on the cost.

The rise of cheaper shoes, sold without expert advice and proper fitting in stores and supermarkets, has also had an impact. Not only do they cost less, but they are often more convenient to buy than taking a child to a proper shoe shop for a fitting. 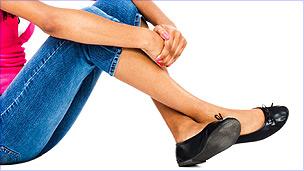 Fashion is often bad for feet.

But it's a false economy in more ways than one, says Bob Hardy, a leading expert on shoe fitting and fellow of the Society of Shoe Fitters.

"Not only are the health of their child's feet at risk, cheaper shoes often fall apart and people end up going back two or three times for a new pair. They end up paying the same as they would have for well-made, properly-fitted shoes.

"Also, these shoe often don't come in half sizes or different widths, both of which are important if you want a shoe to fit properly."

Fashion trends also sway one in ten parents. This is a particular problem among older children and teenagers.

"Take the current trend for ballet pumps among girls. They offer no support and are very flat. If you have an active child running around in them it could lead to Achilles [tendon] problems in the future."

There are checks that parents can do at home to make sure their child's shoe fits properly, says Mr Hardy

A part of BBC News Magazine, Who, What, Why? aims to answer questions behind the headlines

There should be no more than a 14mm gap between the big toe and end of a shoe in a new pair. Anything less than 8mm and it's time to visit the shoe shop and get another pair. When it comes to width, the shoe should be supporting the foot, not squeezing it.

It is worth going to a shoe shop because proper shoe fitters will have undergone specialist training, either through their employer or with the Society of Shoe Fitters.

What parents should also remember is there are variations in shoe sizing due to factors like the place they are made, says Mr Hardy. German shoes, for example, are wider than Italian.

Because of this a child's foot should be measured every time they get new shoes and parents should not rely on the size printed inside the shoe, he says.

Finally, make sure both feet are measured, as one can be larger than the other.